Recently, we do the research related to GIS for Yangon City region. This research area contains the

For creating the image data sets of YANGON city, the downtown area of Yangon is divided into 4x,xxx parts of sub images from Google Earth. The parameters of each part is approximately 0.15 square kilometer. The Latitudes , Longitudes and Position Coordinate are also record in data set.

Extracting surrounding services system is developed for user preference awareness that will figure out the user location and searching the desired place and location around user. Location-based services allow users on the go with access to geographic data from micro-laptops, tablet, PCs, PDA etc. In this system, creating a ring range around a point with user preference distance and generating the latitudes and longitudes of the services at a given circle range to extract accurate services according to their geographic coordinates. Combining the sub images to achieve the map for the ring rang and then this ring range displaying on the map. Coordinate Converting Algorithm is introduced for converting the geographic coordinate to image coordinate system. The specific information according to user is extracted by the preference ring range. 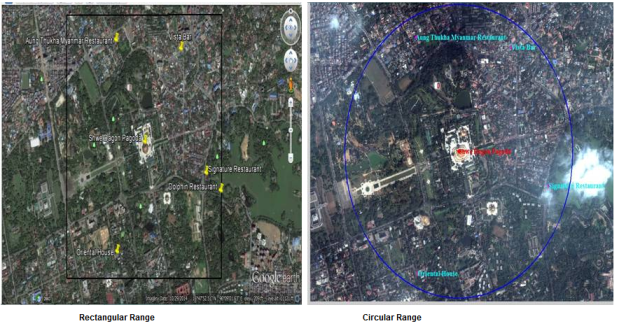 Specially, a spatial keyword query takes a user location and user-supplied keywords as arguments and returns object that is nearest one from user current location and textually relevant to the user required keyword. Geo-textual index play an important role in spatial keyword querying. To reduce IO costs, CUP costs and searching time, a new index structure that combines K-d tree and inverted file for spatial keyword query is proposed. The proposed system create hybrid geo-textual index structure that integrate location index and text index to process spatial keyword queries efficiently. That combines K-d tree and inverted file for spatial keyword query which are based on the most spatial and textual relevance to query point. Using approximate string matching method, the inconsistencies and errors of the user's typed keyword are repaired. Euclidean method is used to measure the distance between two points and Levenshtein distance is used for approximate string matching for user input keyword. K-d tree is a multidimensional generalization of a binary search tree. The proposed system is developed by using java language, JavaSever Pages (JSP), PostgresSql and Google map. 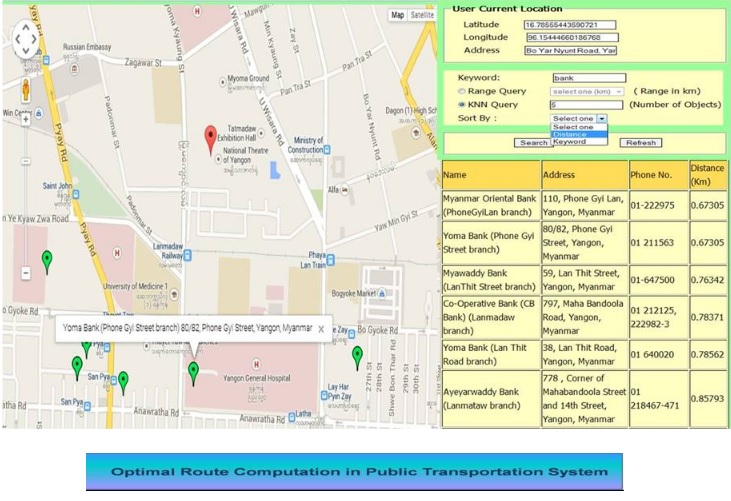 Public transportation system is the key technology for urban areas. Most of peoples in Myanmar are used the public transportation such as bus, taxi, rail and so on. Traffic congestion is becoming a serious problem in more and more urban cities. Encouraging more private-vehicle drivers to use public transportation is one of the most effective and economical ways to reduce the ever increasing congestion problem on the streets. To make public transport services more attractive and competitive, providing travelers with individual travel advice for journeys becomes crucial. However, with the massive and complex network of a modern city, finding one or several suitable routes according to user preference from one place to another is not a simple task. So, how to find an optimal path in complex urban traffic roads to reach the destination quickly is an important issue to solve urban traffic problems.

Especially, the people in Yangon area are used the public bus transportation. Yangon down town region is limited from left latitude 17.03' 56.63" N to right longitude 96· 19' 04.15"E. When the user give The bus transportation information for Yangon downtown region such as bus stops name, bus routes name, bus type, latitude and longitude position are stores in spatial database. The vector road map is also applied for this research. Using Google earth road picture as the base map, we established a complete spatial databases of roads and surface features in Yangon downtown region, completed the spatial database and attribute database connection. In this proposed system presents an approach to compute a reasonable number of ranked shortest paths, with the ultimate 'most optimal' path being selected by consideration of preferences. A* algorithm is used to calculated the optimal path and transit algorithm is used to identify transit point for transfer information. Some experiments have been done based on public transportation of Yangon City, Myanmar.

Discovering the change information on the surface of the earth by comparing and analyzing multi-temporal satellite images. The environmental changes are directly affected to the development of the country. In a rapidly changed urban environment, remote sensing is a useful technology for change detection and Geographic Information System (GIS) database updating. Especially, change detection methods with high-resolution satellite imagery are very useful the environmental monitoring, circumstantial analysis of disaster damage, inspection of illegal buildings, the military use and so on.

Extracting buildings is one of the most complex and challenging tasks as there exist a lot of in homogeneity due to varying hierarchy. The estimation of the growing rate of the urban area is essentially required for developing country Myanmar. The automatic change detection system is developed for analyzing the growing of the urban area within ten years. Especially, the changes of urban area in Yangon, Myanmar are analyzed in this system. The satellite images of the successive ten years are grabbed for each urban area. Unlike the other existing change detection systems, the predetermination is performed the change or unchanged among the image pairs before processing the urban change detection. Only changed image pairs are continuously to process. It will reduce the time complexities and data management. Speed Up Robust Feature (SURF) method is used for image registration and tested area of this method is shown in following figure. The building regions of a registered image are extracted by the modified Morphological Building Index (MBI) approach. The resulting building feature is carried out using matching-based change detection rule for region growing to get output changed image. The system can successfully detect buildings of urban area even in complex region with many trees and roads.

The three dimension city model are important in urban planning, disaster management, traffic control and tourism work. The 3D geo-visualization model of building, object and scene are very useful to understand simply the situation of urban area. The building extraction and 3D reconstruction are challenging problem of urban area for GIS applications if only satellite data are available. Thus, a new method and strategy that increase the efficiency for the 3D urban modeling is required information from an image. The 3D virtual view of the urban area is provided to understand the situation of this region. Some famous building and places already have been represented by 3D model view in Google earth, any GIS and other GIS application software and so on. The three dimensional reconstruction system is generated for the building model of urban area.

This research is focused on the building extraction and 3D reconstruction of the low resolution satellite images to provide the visualization system. The efficient building extraction algorithm is introduced based on color segmentation and morphological method. The approach is based on the affine projection to compute the corresponding between two satellite images. To reconstruct the 3D model, the depth map is created by the modified factorization algorithm with singular value decomposition (SVD) is used to project the image point.

The system develops automated methods of feature extraction. To retrieve the building features of low resolution satellite images, the colour segmentation process is first developed. The building feature points are extracted based on red value threshold. The background elimination is performed. The extracted features are not directly applied to model the three dimensional building. To generate the certain building features, the morphological operation has been developed. The morphological method is useful for extracting image components with more complex operation. The 3D cloud points are obtained from an image based on the SVD with affine relations. The triangle is build using the three nodal points which are projected from a planar surface in the 3D scene and the surface reconstruction is achieved by using Delaunay triangulation method and wireframe.

In Collaboration with University of Computer Studies, Yangon and Myanmar Computer Professionals Association (MCPA) will be held the 9th MCPA Day on 4th March, 2020 at 9:30 am.

The academic year 2019-2020 mid term examination will be held according to the time table in the University of Computer Studies, Yangon.

Myanmar Universities’ Research Conference (2020) will be an online event via zoom application on 25-27 June 2020. (Detailed program will be announced later).

The National Journal of Parallel and Soft Computing will be published in University of Computer Studies, Yangon on 2020.